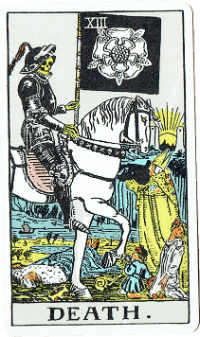 “To everything there is a season . . .” The one constant in a universe of endless change is that everything that is born by definition dies at some point. “Death and taxes” are the two great equalizers (at least in theory). What is more important than worrying about death is actually living life so that by the time Death rides in on his horsie you are “so over it” and yelling at the poor guy that “he is late!”

Death rides a pale horse into town at sunset. Sunset, by the way, was the official ending of one day and the beginning of the next in Druidic calendars, which are the basis for much of modern paganism. Today’s calendars start each day at midnight (the daily equivalent of Yule), even though the sun rising every day is synonymous with spring, and “the time of waking,” both physically and metaphysically. Here a priest of some high rank begs for mercy, a king lies dead, a young girl falls over ill, and a very young girl looks at the pretty horsie. Perspective bequeaths reality. The king dies from his knowledge of nature, the priest begs because of his understanding of nature, the girl on the right falls victim to expectation, and the little girl sees wonder.

“To everything there is a season . . .” The one constant in a universe of endless change is that everything that is born by definition dies at some point. “Death and taxes” are the two great equalizers (at least in theory). What is more important than worrying about death is actually living life so that by the time Death rides in on his horsie you are “so over it” and yelling at the poor guy that “he is late!” Note how Death is the thirteenth card. When the Tarot was devised, and through most of its major changes, the number 13 was feared.

Before you laugh at the thought of anyone being afraid of a number (like say . . . one, two, oh my god! Three’s coming up!), the official term for this superstition is “Triskaidekaphobia.” To this day a good many high-rise buildings politely exclude the thirteenth floor, going conveniently from twelve to fourteen (like the gods can be fooled that easily). Being afraid of a unit of math* (a number) is as silly as being afraid of this card. But people like their superstitions, so if your client freaks out because this card comes up in their reading, simply tell them that this card means “they will be getting a pony soon.”

​Death. But not usually. You see, there are only 78 cards, so the chance of any one card showing up is 1 in 78, which aren’t bad odds at all. Now in a multi-card spread like the Celtic Cross, the chances for any one card showing up (even before you start opening up cards, or the reading itself) drop to 1 in 7-point-something, depending on whether you use a significator (or two), or not.

The chances of most people dying in the next 30–60 days is hardly “1 in 7.” Thus, each card has to pull “double duty.” This doesn’t mean that the Death card will really start to mean that it’s “new pony time,” but it will also show things like endings and beginnings. Please remember that every “major” Arcana card is an allegory that must be deciphered.

For example: If someone walked up to you and said in a sagely voice, “There is no spoon,” you might think (and rightly so) that they are both intrusive and insane. But if they explained (before you had a chance to run away from the crazy person) that the line they just used on you was a quote from the movie The Matrix and explained that a small child was explaining to the confused and very frustrated neo-messiah of the future that the whole of reality was just a figment of our imaginations (hmm . . . where have we heard that before?), all of a sudden it would make sense.

You still may not like random strangers using oblique pick-up lines on you, but you would understand what they meant by, “There is no spoon.” That is why you want to open up or associate “major” Arcana cards with “minor” Arcana cards instead of allowing your clients to get the heebee-jeebies every time a card comes up they don’t understand, and don’t like. The Death Card means change. Big change. But where? Life? Divorce? Job? Is this part of a move?

The Death card comes along and “shakes things up” (much like The Tower), but Death is intimately personal, whereas The Tower is impersonal and external. When you see this card, find out what changes your client is going through internally and help them with that.

The Death card in the reversed position means Stagnation; refusal to let go. Holding on to outdated ideas. A boring life.