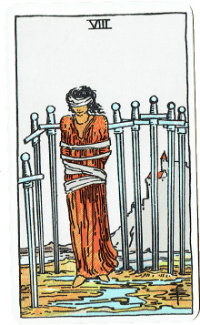 Depicted in the Eight of Swords, A young woman stands bound and blindfolded on a featureless flat plain. She is surrounded by eight swords and the wind slashes at her.

In the background of the Eight of Swords, set high on a rocky cliff, sits the fortress house of a powerful lord, perhaps her oppressor.

The energy of this card is stagnant. Fixed.

Prime Elements in the Eight of Swords 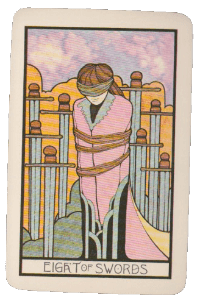 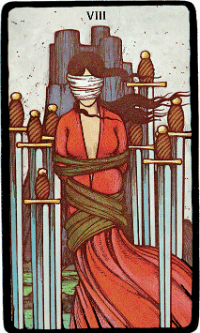 The Eight of Swords card obviously illustrates being trapped in a situation. Incarceration, feeling emotionally closed off, creatively stifled, being held hostage by unseen forces (most often a mediocre job, few viable options for betterment, trapped in a bad marriage, etc.).

But the thinly veiled underlying message behind the Eight of Swords card is that all of these possibilities are merely the totality of a wall of stone that surrounds you at this time.

To effect your escape from this imprisonment certain stones must be removed. To take down a wall quickly and easily only a few select stones need to be removed for the weight of the wall to collapse in on itself. You don’t have to take each and every stone down by hand.

The Eight of Swords card is a wake-up call to selectively remove things from your life that are collectively causing greater harm than they could individually. 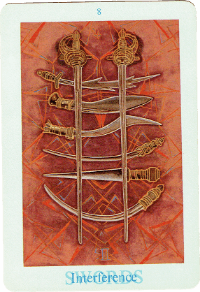 When reversed, the Eight of Swords can mean escape or release from anything that has been holding you down so far. A chance for freedom is coming. Re-entering society.

For complete information on the Eight of Swords card including how to use it to manifest your desires please try out a copy of The Easiest Way to Learn the Tarot—EVER!!