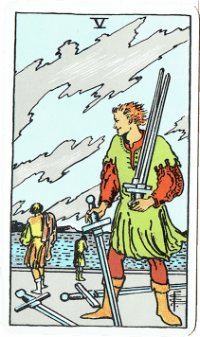 In the Five of Swords card, a red-headed young man grins wickedly over his shoulder at his vanquished foes. He holds two swords he has recently added to his own collection, and two more swords lie carelessly dropped on the ground before him.

The man depicted in the Five of Swords card is a petty tyrant, one of no consequence, except that individually he has intimidated, or beaten, others into submission. His will dominates theirs and thus everyone’s destiny changes.

This act of bullying is cardinal, even though all action has ceased since any possible opposition has surrendered the means to do so. 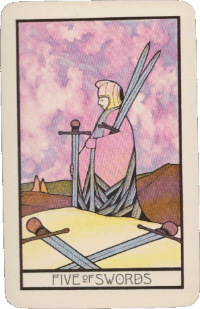 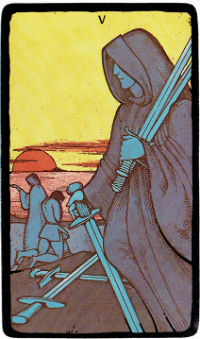 Open intimidation by a bully. Physical, mental, or verbal assault by someone who carries the need within themselves to dominate others in order to gain self-worth. This intimidation may be due to actual skill, or it may be empty words and posturing. What matters is the effect it has. Verify the actuality of the threat by opening up the card, and comparing this card to aspecting cards.

Note the high winds blowing on the bully that do not affect any of his victims. The rage that blows the clouds across the sky feeds his ego but does nothing to soothe or invigor those who have given up their hope. The Five of Swords card can also show weakness among the masses (fear of a dictator or “strong leader”). 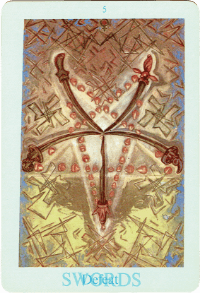 The Five of Swords reversed is an end to subjugation, freedom from oppression. Conflict resolution comes after someone has the nerve to stand up to false authority. More than likely this will be a concerted (team) effort rather than any one individual (e.g., David vs. Goliath).

For complete information on the Five of Swords card including how to use it to manifest your desires please try out a copy of The Easiest Way to Learn the Tarot—EVER!!