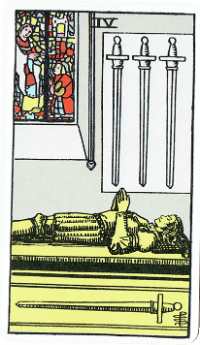 The Four of Swords card depicts a small chapel of a keep holds the final resting place of a valiant knight, presumably to whom the family is indebted.

His effigy is carved in stone on the lid of his sarcophagus. A replica of his personal sword is carved on the side of his sarcophagus to serve him in the afterlife. Three swords are mounted on the wall above, next to a stained-glass window set high in the wall to bathe his monument in late-afternoon sun at the end of the day.

This is a high honor bestowed only on a handful of men at arms. It simply is not possible, nor cost-effective, to go to the efforts to do this for everyone. 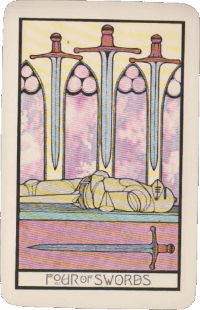 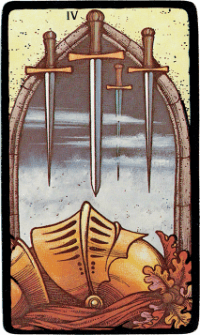 The Four of Swords is not a card of death (there are several of those already—if this were yet another card of death, that would be redundant).

The Four of Swords card symbolizes a few different but related fixed energy concepts. Most often it shows a rest after protracted effort: a retirement, or putting something to rest finally. It could also indicate rest after surgery.

An alternative set of the Four of Swords meaning is that of legacies, monuments, and honors bestowed rather belated. The Four of Swords card could indicate an inheritance if aspected by any of several cards.

Physical locations indicated are quite naturally funeral parlors, crypts, and the morgue. Occasionally this will indicate actual funerals. 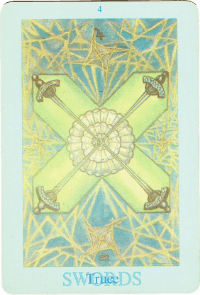 The Four of Swords in the reversed position can mean dishonor. Someone is digging up the past, or things that are better left alone. No rest from prying eyes and searching hands. Lack of recognition for one’s efforts and deeds.

For complete information on the Four of Swords card including how to use it to manifest your desires please try out a copy of The Easiest Way to Learn the Tarot—EVER!!