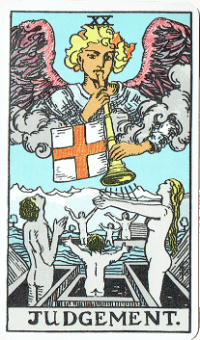 Judgement is the end of the line. “The test is over. Please close your books and turn in your papers. You got about as far as you are going to get, and any of you who ‘finished early’ and have been waiting for the rest of the class can finally leave. Have a great summer everyone! See you next year!”

An angel toots his horn signifying the mythical day when everyone will be judged, and a select few will get toys and candy, and the rest will burn in hell forever, and ever, and ever. Amen!

One thing to note is the sloppiness of printing. It took several years of research, and close examination of several of the first decks printed (1909, 1010, 1915, 1920, 1930's) to finally realize that the printers were lazy, and colored the ground blue. They also colored the coffins gray. This was done, not because the printing techniques of 1910 were in any way inferior to that of 2010, but simply (and accurately) put: the Rider tarot was a rush job, cheaply done. No one had any idea these things would sell (and they did!).

For what it is worth, I have included (left) a recolored version of Judgement from a limited edition deck (100 ever made) a few years back. This may assist in better understanding the essence of this card's meaning. 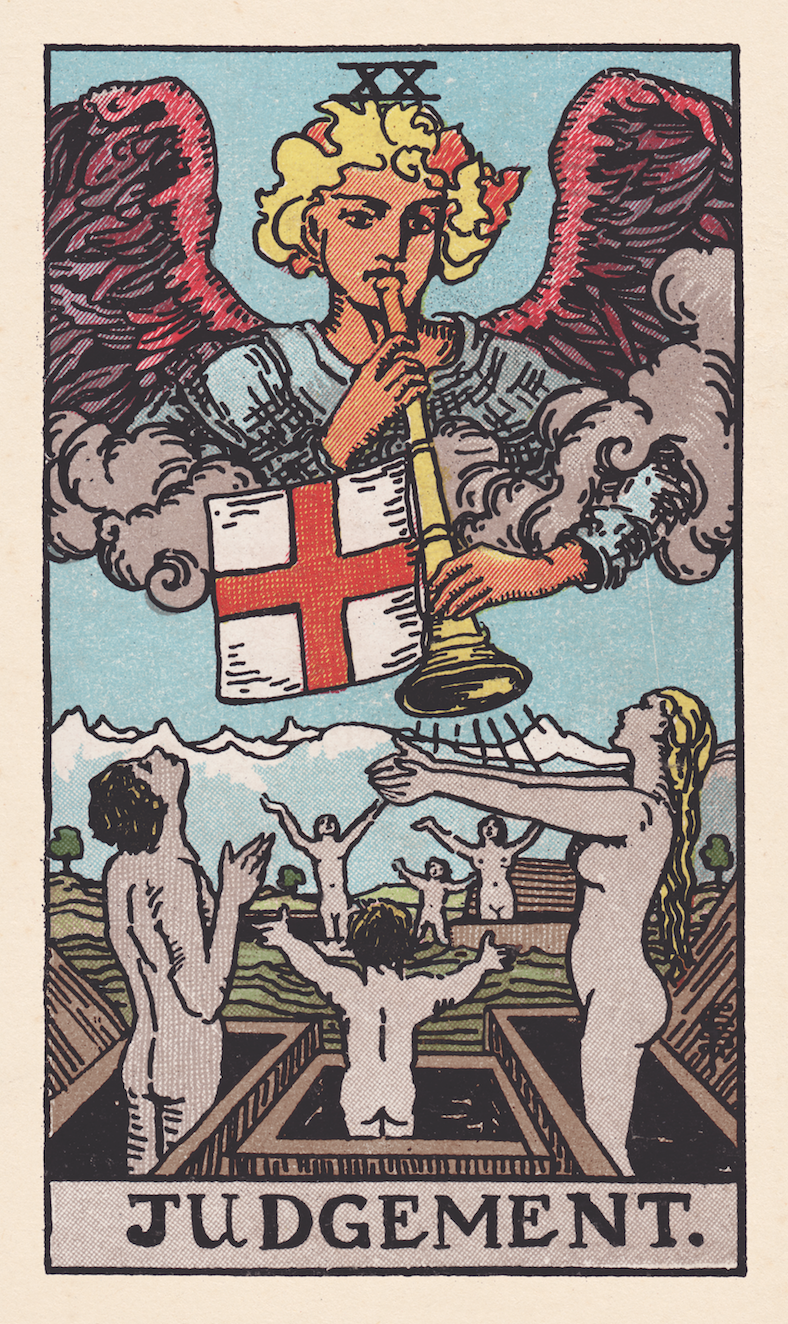 This is the end of the line. “The test is over. Please close your books and turn in your papers. You got about as far as you are going to get, and any of you who ‘finished early’ and have been waiting for the rest of the class can finally leave. Have a great summer everyone! See you next year!”

This card actually draws from a number of religious beliefs from Christianity to Hinduism, Egyptian, and so on . . . No matter what belief you subscribe to (including the “non-belief”), this card is highly useful to call it “the end of the day” and move on. Whenever you want a card that means “I have had enough of this. I want it over now!” this is your card. Whatever you were doing, you are done with it now. This card has a lot in common with Death, or The Tower, but this is not simply a change of state alchemically, it is a change of state with a chemical reaction. (This is also why we have “mystery schools” to explain all of this esoteric mumbo-jumbo, but just go with us on this.)

Judgement gives us “a say in the matter.” Some situations end and you just feel empty (Death), or like you have been cheated (The Tower), but Judgement is all about having your voice heard (“ . . . and another thing! . . .”) before the curtain falls. It also indicates reports on your “progress” (being a double-edged sword). In legal matters, say small-claims, or divorce for example, this card shows you getting “your day in court,” where no matter what happens, you officially get redress. You are vindicated in some way, with the aspecting cards showing how much so and what happens as a result. In religious terms of “life and death,” it can mean just about whatever you want it to: resurrection, the final day when an angel comes along and collects everyone all at once (Imagine that line! What if you have to go pee? Do you lose your place in line?).

​Zombies. Well, they do look like zombies to us (gray skin, rising from the dead . . .). This card indicates (as noted above) the end of something, but not necessarily the beginning of something else. It is both a “progress report” and a respite from action; a pause if you will. In the most simple cases, it does indicate lawsuits or judgments in lawsuits, report cards, school graduations, breaking up after a loud shouting match. It simply represents the end of something and a marker stone placed in the Akashic Records that says “this happened and as a result . . .” Now it is time for something else, but what that is will be left up to you, and that old devil circumstance.

“ . . . and so there I was at the party, trapped in the corner by this really creepy old guy who just kept going on and on about how he owned this company and that, and how much money and power he had, and . . .” Back in days when music was recorded onto vinyl, the circular disk had a long spiral that the “record player” needle sat in and responded to all of the little bumps, in turn, translating that into sound. But sometimes the “record” was scratched, and the needle would jump the groove and play the same section over, and over, and over . . . The effect was very annoying. This is “just like that.” You go around, and around, and look for a way out of this mess, but you can’t seem to find one. Perhaps it is time for a clean break—even if you have to make sacrifices to get off of this ride.