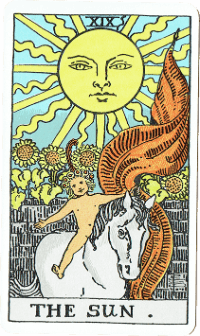 This is the Sun über alles (before or above all others). Everyone knows the raw power of the Sun. It officially gives earth life. Haud sol solis , haud vita. (No Sun, no life.) In fact, the Sun is the single most worshiped object ever. In all parts of the world the Sun is equated with the local deities, mostly male, but occasionally female. The Sun is everywhere and is always welcome, although in the most harsh of desert climates it is often seen as a harsh master rather than a benevolent “god.”

A baby (blonde naturally, he’s probably a Leo anyway—what is it with eighteenth century tarot scholars anyway? Did they think that the entire world was white?) rides a white horse while the Sun looks on. Sunflowers tower overhead and the baby miraculously holds high a flowing red banner of relatively gigantic proportions. Note the Sun’s rays spread in all directions, the straight lines indicating the spread of light, while the wavy lines indicate the radiance of heat. This shows the Sun in its “infinite glory,” unobscured by those pesky clouds or eclipsed by the nascent moon. “Nothing can stop the power (and joy) of the Sun!” . . . until it sets (leaves you for some distant land), or you walk behind a tree, small hill, building . . . Still, all in all a happy card if you are into tan lines.

This is the Sun über alles (before or above all others). Everyone knows the raw power of the Sun. It officially gives earth life. Haud sol solis , haud vita. (No Sun, no life.) In fact, the Sun is the single most worshiped object ever. In all parts of the world, the Sun is equated with the local deities, mostly male, but occasionally female.

The Sun is everywhere and is always welcome, although in the most harsh of desert climates it is often seen as a harsh master rather than a benevolent “god.” Kind of like a military drill instructor (“ . . . hup, two, three, four! Get in line soldier! Did I give you permission to bleed? Walk it off mister!”).

Face it: the Sun is a monster

​It is big, really big: as in it’s over 100 times as big as us (Earth). It never sleeps (which is rather creepy when you think about it). It is always shining at us no matter which way we (the Earth) turn, and if you look at it for more than a few seconds at a time, you will lose your eyesight very fast. The Sun is so hot that you could not even stand on it. In fact you can’t get close enough to stand on it, you would crisp up like a french fry a few million miles away from Herr-Sonne.

We take the Sun for granted because it is always there, and by our standards “it always will be.” None of this changes the fact that it is big and powerful and it affects us in psychological and chemical ways we have yet to completely understand. This card represents all of that power in one overly simple scene.

Unlike the energy of The Star, however, The Sun is cyclical. The Sun rises and sets, whereas the stars always shine, only blocked by the closest of them all (our all-encompassing Sun). When the Sun is “here” (during the day), nothing else matters. Rain, wind, and snow can block out the Sun for periods of time; but unlike night, we know that on the other side of those pesky clouds our giant ball of fire still shines for us, eating away at the barriers from the other side. (Are you getting this?)

This gives us insight into the meaning of such a card. When The Sun is present, it feeds us life-giving energy. It gives us light and heat. It can also be overpowering in its delivery. It is so pervasive that we don’t even need to look at it to know that it is there, as its effects are everywhere. When The Sun is not present in a reading, we still know that it exists somewhere, shining on some distant land, and that the secondary effects still aid us, and we can draw off of them, even in the darkest of times, if we only learn how. We can block the great expanse of energy The Sun lends us (and as humans we often do) just as we can avoid sunlight by ducking under a tree, going inside a building, or even just closing our eyes to the light all around us. The Sun provides, but we have to accept. The Sun is no different. In order to win, you must be present.

Success, usually after struggle. More specifically: energy and intent is being offered to you from various sources. This can be “divine intervention,” creative inspiration, physical assistance from others, loans of any sort, sound advice, etc. You are in the spotlight. People and “things” are looking to help you at this time, but you must be alert to opportunity and aid if you are to accept the goodies in store for you. Destiny is an opportunity—not a guarantee. Never forget that.

Closing off from help; depression, paralyzing fear, lack of support. Bad days, sunburns, loss of popularity, ideas that never get off of the ground, lack of openness and honesty in one's environment.