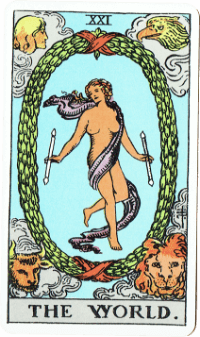 Alchemically speaking, this is the end of the road. Not many make it here (in the sense of evolutionary progress), but from this point you can go no further (consult your local mystery school for: "octave 4," and The Fool renewed for a counterargument to this). That disclaimer being cast, this card shows the holy existence attainable above the mundane matters we all must endure everyday. This is the card of total awareness and total freedom, and in that essence, it is the card of absolute power to create or destroy anything, the merging of one's will with the great and mystic law of cause and effect.

Needless to say, this card implies this is only possible when one rises above the need to exact revenge, or gain worldly possessions desired by lesser beings. This card is a state of evolution, not "raw power" (Emperor) or skill (Magician). This is "rising above" the current situation or environment, to achieve a freedom of thought and action, by extracting oneself from the drama, and subsequent bias, of any situation. This card can (and will) reflect this as an event, a momentary state (detente), an attitude, or a way of life, as your question—and resultant spread indicate.

​A celestial woman (goddess) dances in the air with her twin wand-candles (see The Magician), which she is the undisputed master of, not merely the possessor (also see The Magician). This is reinforced by her purple sash.

She is surrounded by a laurel of victory that is also a portal to her home dimension, or a gateway to her. Four guardians sit in attendance: angel, eagle, lion, bull, representing various character qualities as well as the elements of awareness and existence. This “audience of mythical beings” is an ancient allegory used by various religions to illustrate the value and power of the central figure at the gathering. She is obviously “above and beyond” the limitations of all earthly influence (including gravity it seems).

Tranquility, enlightenment, evolution. If the Buddha were a female (and one made a special guest appearance in the Lotus Sutra), this would be her. She is both source and seed, being the physical manifestation of and the spiritual essence of purity through experience and awareness.

She has completed “the circuit” and passed all judgments, tests, and has moved well beyond such mundane concepts as “testing and progress.” She simply is. This is an existence far beyond the toils of the field or the wealth of nations. This is an existence of awareness embodied in human form, free of need or desire. She is a celebration of life unchained by any restrictions.

Some have said that “the universe will not end with a bang, but with a whimper,” suggesting that life will simply die out slowly as (measurable, or ‘light’) matter is stretched too thin to support itself. Suns will consume themselves and planets will simply be rare floating cosmic debris. One of the many things they have failed to consider by use of this prognosis is that energy can neither be created nor destroyed.

In the very same way that “one man’s food is another’s poison,” the energy of the universe will evolve and metamorphose into something else eventually. Leaves bud, grow, drink in the light of the sun, breathe in carbon dioxide and breathe out oxygen, and eventually wither and die, falling to the ground, a seemingly empty husk of their glory. But to the tree who watches generations of its leaves die and fall away at its calling, these very same expressions of itself become future food for its own roots and that of its children. Nature may be rather cannibalistic, but it never “wastes.” This card represents the endless series of cycles of completion and renewal with each twirl of her double-ended candle wands. Her dance continues joyously even as the world turns, dies, and becomes something else entirely.

This is a very happy card on the physical level. At its most basic it represents the pampered and the idle rich; those wonderfully happy people born into generational wealth (see 10 of Coins) who have nothing better (or worse) to do than to play all day and wonder how they will play all night as well. It truly is “the world at your feet.” The key to this card is that it is evolution on so many levels of meaning that it can easily apply to any situation. It is extremely ambiguous and all but demands clarification by accompanying “minor” Arcana cards to give it focus.

This is another completion card, but as noted it is a card of evolution from one state to another. The alchemical correspondence is that of transmuting lead into gold. The base chemical composition is almost identical, but the elemental change is eclipsed by the perceived value change. In the same way, you stay “who you are” but become something much more valuable through this card. This is the ultimate “happily ever after” card (compare to the 10 of Cups).

“Leftovers again?” (or) “If I have to go back to that horrible job one more day . . .” Endless, meaningless, repetitive, redundant existence—“Every day the same thing: Breathe, breathe, breathe.” You really need a vacation right now. You are missing out on all of the fun in life. Go dancing!

For complete information on this card including how to use it to manifest your desires please try out a copy of The Easiest Way to Learn the Tarot—EVER!!