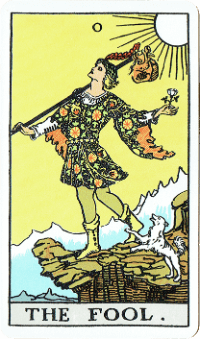 The essence of The Fool is the essence of “humanity.” The Fool  emphasizes the Buddha seed in all of us, the spark of creativity, the joy of unbridled freedom as we escape from the limitations of the “minor” Arcana (food, sleep, money, sex, love, etc.). The key to focus on with this card (see expanded meaning below) is that he is not  "foolish" at all. He is willfully ignoring his "yappy dog" (the nay-saying voice of "reason/logic" inside his head) in his journey *from the material* to the ethereal. This card blends the innocent ambition of Aries (energy) with the transformative energy of Pisces (energy). This is a card of beginnings, blossoming, and also escape from the mundane. It speaks of new adventures, leaving responsibilities behind, ignoring nay-sayer and conventional "wisdom," and doing the impossible despite odds or support. When this card comes up in a spread it shows optimism, an adventurous spirit, and willingness to take risks. Please keep reading for more detailed information on this card.

A gaily dressed young man traverses the heights of his world. His burden is light, the Sun is shining, and the rose in his hand still holds its scent. He literally is “on top of the world,” lost in his own joyous meditations. His next step may be his last, or perhaps he may have mastered the ability to walk on air. Either way, he is simply too in love with whatever occupies his mind to pay attention to such trivialities. He has found optimal bliss. Even his fluffy white dog’s happy barks do not call his attention away from his serenity. What is implied in this image is that he is in no danger of falling. The challenge in viewing this card is to face our pre-conceived notions of "gravity."

Waite conceived this card to force the viewer to choose between the mundane view of the world ("That idiot is blindly walking right off of the edge of a cliff, even though his dog is trying to warn him of the danger!"), and the alchemical view of the world ("That man has only what he needs, and nothing more—no baggage, no luxuries to slow him down or drag behind him—this man is truly free. He is so light that he will simply float on air with his next step, leaving thee limitations of "rational thought" behind him"). This image is a classic introduction to the entire tarot deck as a system useable for meditation, divination, and manifestation. This "first card in the deck" forces us to abandon "logic and reason" based on our limited awareness (five senses and life experiences) so that we can explore reality beyond our bias—or be forced back inside the world of our own beliefs, and in so doing, completely miss the greater path of the soul.

By altering the traditional European image of a ne'er-do-well assaulted by a cat (or a dog), Waite reenvisioned this card to mean something far more alchemical than it had been over thee hundreds of years where the Tarot was just a game of cards. The additional implication of this card is the power of the message, image, or allegory, in changing the dialog—and why it is so important to learn this properly, lest we end up only skillfully delivering false accounts of thee future, or past to our clients. 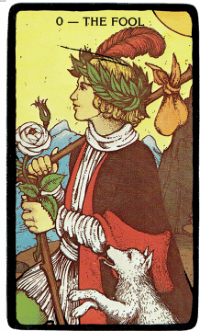 (See Description—above) ALSO: The Fool sits outside of the fixed “reality box” of the numerical concepts of positive and negative integers. Waite really tripped us (future tarot students) up by making the number for The Fool a circle, instead of a zero. There is no "zero" in Roman Numerals (the counting system used in the modern Tarot). The Romans did use the word "nulla" (none), when necessary, but they did not have a symbol, like "0." By marking The Fool with a circle (literally " O ") and then not explaining his logic in his books, Waite forced us to imagine a zero, or a circle, or an 'o', and then decide, based on our own intellectual bias, what that means.

The Tarot limits existential understanding to 21 hard-coded stages (1 through 22). The Fool laughs gleefully at them all, and can appear anywhere in the deck. Sitting outside the set of 21 numbers (which can conveniently be divided by 3 or 7 — magical numbers to Christians)The Fool was designed as "an escape" card in the game Tarrochi—the original incarnation of Tarot.

Further, even 350 years after the tarot was invented, when the first Tarot reader (Etteilla) came on the scene, The Fool still was played as "an escape card," meaning that the player did not have to follow the standard rules. There was a special clause written into the rules that superseded "normal rules of play," when it came to the Fool. This exact meaning continues to this day in metaphysical use (divination, manifestation, etc.) of this card.

For complete information on this card including how to use it to manifest your desires please keep reading below, or try out a copy of The Easiest Way to Learn the Tarot—EVER!! and Advanced Tarot Secrets.

It is an interesting point that at the moment of chaos you are most truly free.

It may not feel that way at the time, but once you lose everything, you gain even more. Without the burdens of luxuries or (self-imposed) responsibilities to tie you down, you can go anywhere you desire. Think on this for a moment. This is why the “chaos star” has eight arrows (the eight "directions"). This card represents that freedom. You do not have to “lose everything” to find this freedom in yourself. You simply need to click your heels together three . . . er, take a deep breath and just say “_______ it!” (use your favorite term). You find joy in life by pursuing what is important to you, not your boss, or what your parents want you to do, or how your friends “think you should behave.” Note how the Fool is completely at peace with whatever befalls his next step. That is you when you stop caring what other people want you to do (so they can be happy).

The Fool card can represent you enjoying any new beginnings, whether they are new ventures, freedom from restriction, new directions in life. This is your personal “get out of jail free card.” When you see this card, see the opportunities ahead of you and the courage that comes naturally with pursuing what is most important to you. Whatever happens next is not as important as what you want it to be. One of the metaphysical secrets of this card is that it is a wish card. The future is not set (he has not stepped off of the cliff yet). Circumstances are always a result of people deciding how reality should be and making it so. The fact that everyone else simply shrugs and goes along with their vision is simply a matter of history. When this card shows up, it is time to take that leap of faith and spread your wings (and flap like crazy!). Take this card and put it anywhere in the deck—and that is where you will be. That is the real power of this card.

Missteps and fear brought about by over-analysis. Fear of the unknown. Self-limitation forces one to remain in whatever prison they have created for themselves. Inability to act decisively. Check aspecting cards to see who and what is helping create (or enforce) this limitation. Open it up to reveal how this can be overcome. Hesitance almost always means opportunities missed. Also: If The Fool steps halfway, trying to be both on the cliff and off, he will almost certainly fall. Don’t do that.