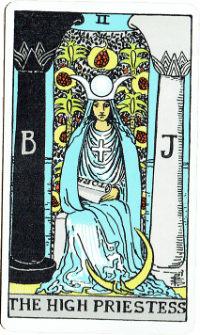 This card is the yin to The Magician's yang. Where The Magician tells us the power of skilled proactive determination, The High Priestess gently admonishes us to "sit and listen," to know through attainment of knowledge, rather than aggressively act without it. This is the card of meditation and also of intuition. It shows us the power of, the need to, and the act of being receptive to data transfer, over aggressive research. This is a time to (or someone is "doing this") sit quietly and observe, but with more than simple awareness. Now is the time to stretch out with your senses and follow your intuition to lead you to the places and events you need to personally experience, in order to receive the information you need to achieve the results you desire.

The woman in this image is someone who has studied the mysteries of life, creation, and existence. The Torah tells us that, as this was sacred to Waite (being a Catholic who was obsessed with Christianized Kabbalistic magic). The equilateral cross on her chest is an ancient symbol of balance and harmony, the blending of universal forces to create a state of parity and harmonic resonance. This is one of the oldest symbols of humankind, dating back several millennia, predating Christianity by more than 3,000 years. Despite later being co-opted by sun cults and even later, hate groups of the 20th century, this is a peaceful symbol indicating the right amounts of everything, in the proper order. This symbol on her chest reveals this essential "recipe" of magic is central to her knowledge and power.

The twin pillars Jachin and Boaz (Hebrew reads right to left) are from Solomon's temple. This is a natural reference, as Waite was fascinated by ancient scholars and metaphysicians—Solomon being chief of the sources modern ceremonial magicians (including the various "Golden Dawn" groups) modeled their beliefs, symbols, and magical ceremonies after. Throughout the modern tarot we can see Waite's love of ceremonial imprinted as symbols, in the artwork of the deck. While these have a certain value, they were most valuable to Waite, as he re-interpreted them to match his beliefs. They do not all have specific value in divination.

The pomegranates mark this woman as Persephone, and her mother (The Empress) as Demeter. This is a ridiculous forcing of one world view on top of a wildly  incompatible different world view. The (monotheistic) Hebrew view of the afterlife (Olam haBa) is  . . . complicated, and needs to be studied and meditated on. But, this world-view is savagely incompatible with the polytheistic notion (Greek) that there are Olympians (literally super-humans, with their own personality disorders), and the five rivers of the underworld: Archeron, Cocytus, Lethe, Phlegethon, and Styx. We can see possible reference to at least one or two of these rivers in the Hight Priestess card, and the Six of Swords. But this is the tarot we were given, not some perfect tool of mystery designed by (the) God(s). It's okay if it has flaws, as long as we don't try to twist those into "occult meanings" in an attempt to make the tarot some angelic and perfect tool handed to us by aliens and dolphins.

The pearl in her crown is vaginal, and speaks to her purity (again with the Eleusinian Mysteries: see Virginal Priestesses of Vesta—"Pre-Apollo"). The moon at her feet is place there in supplication, showing us that she is "beyond the moon"; or "beyond imagination." She is the force that lies beyond emotions, imagination, and fantasy, and can only be accessed through the (gateway of) intuition. This card is literally a blatant Edwardian Era (1901–1910) advertisement for the necessity of "mystery schools." A simpler (un-convoluted) understanding of this message is that only through developing a clear and unpolluted (by bias, emotion, and imagination) intuitive gateway can you reach The High Priestess, the avatar, or anthropomorphized (allegorical) form of the source of information. Think of The High Priestess as the cosmic librarian — YOU need a working library card to reach the reference desk. 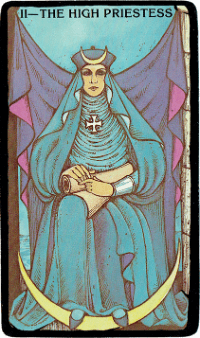 See directly above. Also: In The High Priestess Card, her crown can be interpreted as you like, but consider that the moon is already overtly illustrated at her feet, as if she is in command of it; herein lies the essence of this card meaning. Duplicating it needlessly at her crown is not only metaphysically incorrect, but also goes against the entire consistency of how the moon is drawn throughout the tarot: The moon is always shown in crescent.

Compare that to how the pearl is the sea’s most precious and rare jewel. It has always been found only rarely in oysters that “swallowed” a grain of sand and built the pearl as a response to the annoyance of the disruption of serenity. Nature manifests greatness from disparity and discomfort, and the pearl is a prime symbol of this in magical use. Pearls are another statement of insight and purity, as well as representations of the moon. All miscellaneous aspects aside, the importance of The High Priestess is her representation of duality, and the completion of a cycle.

A sine wave arches “positive” and then “negative” as stimulus is offered and withdrawn. We see this as a polarity, most often in terms of male/female, day/night, “good/bad,” up/down, “heaven/hell,” right/left, “God/devil,” and so on, ad infinitum. The High Priestess represents psychological dualism (the “this or that” paradigm that is all too common in bilaterally symmetrical life-forms). As The Magician is the act of will pressed outward upon the world (phallus), she is the receptive organ of creation (you can guess where this is going). Together they represent the twin forces of creation.

She is “imagination,” which is not to be underestimated simply because the act of will is so obvious. The High Priestess is a full half of the creation process, as she is the gateway to the ether. Neither she nor The Magician is more important nor more powerful than its counterpart. They are a team on a Tantric level of awareness few magical practitioners can even grasp, much less actually aspire to achieving.

Intuition, imagination, dreams, creative spark or inspiration. She brings new understandings of situations through listening, not acting. She is communion, prayer, knowing when to seek guidance and doing so.

Her abilities lie in everyone. They exist at all times in our subconscious minds and are our direct connection to whatever we individually call “God.”

This card shows or advises reflection, quiet listening, intuitive work, seeking out expert knowledge and assistance (both on a “higher plane’”and physically). Pair this up with a “minor” Arcana card to see what she is alluding to.